Jake McQuaide‘s second Cowboys season will end early. The veteran long snapper suffered a triceps tear that is expected to sideline him for the rest of the year, according to NFL.com’s Tom Pelissero (on Twitter). 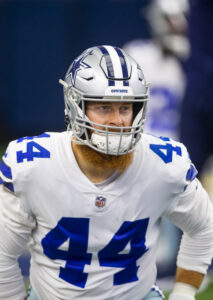 The Cowboys are adding some reinforcements and look set to hold a long-snapping competition this week. Dallas is signing snappers Matt Overton and Tucker Addington to its practice squad Tuesday, Pelissero adds.

An NFLer since 2011, McQuaide spent 10 seasons with the Rams. He has never missed a game, playing in 181 since coming to St. Louis as a UDFA. The Cowboys made McQuaide their L.P. Ladouceur successor last year, signing him to the going long snapper rate. McQuaide is on his second one-year Cowboys deal, having re-signed in March. Ladouceur had been with the Cowboys for 16 seasons prior to that change.

Overton has snapped with four teams since coming into the league in 2012. The former Colts Pro Bowler spent time with the Jaguars, Titans and Chargers since his five-year Indianapolis run wrapped. Overton, 37, was with the Bolts throughout last season. Overton will have a considerable experience edge on Addington, who has yet to snap in an NFL game. Addington snapped at Division I-FCS Sam Houston State.

November 17, 2022 superadmin
[ad_1] With feet of snow expected for Buffalo this weekend, the NFL will relocate Week 11’s Browns-Bills matchup. The game